Who was St Augustine? 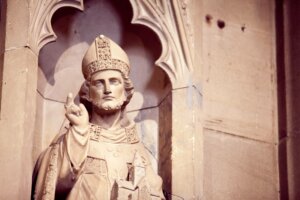 St Augustine was sent by Pope Gregory the Great to England to give the English people the Good News of Christianity. He was a monk at the monastery founded by Gregory (before he was elected pope) on the Caelian Hill in Rome. There is still a monastery there today.

We don’t know when he was born, but he died on 26th May, probably in the year 604, in Canterbury. He was renowned for working miracles, and led his group of 40 monks to bring tens of thousands of people to Christianity – over 10,000 were baptised in their first year alone! He had close contact with Pope Gregory throughout his time in England, and the letters between them survive.

St Augustine was the first Archbishop of Canterbury, though the title came later. A holy, efficient, and hardworking man, he was acclaimed as a saint soon after his death.

What did St Augustine do?

St Augustine formed England as a Christian nation, establishing the roots of our modern culture.

He arrived on Thanet in 597 and was soon given land by King Ethelbert in Canterbury. He taught reading, writing, music, arts and sciences. Along with his companions, through preaching and good example, he converted many people to Christianity.

In Canterbury he established the Cathedral, which he dedicated to the Holy Saviour (or “Christ Church”). He was given more land, outside the city walls, and established England’s first monastery which he dedicated to Saints Peter and Paul, and Archbishop Dunstan (about 370 years later) dedicated it to St Augustine. The original dedications reflected the principal churches in Rome. St Augustine also founded the sees (bishoprics) of Rochester and London, and laid groundwork for York too.

What is St Augustine's Legacy?

Many of the world’s Christians can trace their roots back to St Augustine’s landing near this spot, and so also to Rome and Pope Gregory. The enormous Christian heritage of England stems from St Augustine’s initial efforts in this part of Kent. As England prospered and sent missionaries out to other parts of the world (notably St Boniface and others to Germany, and centuries later to parts of the British Empire), they carried the legacy of St Augustine in the Christian faith, even though he and his papal mission weren’t acknowledged after the Reformation.

Having an impact on almost every aspect of British life, St Augustine’s legacy is enormous.